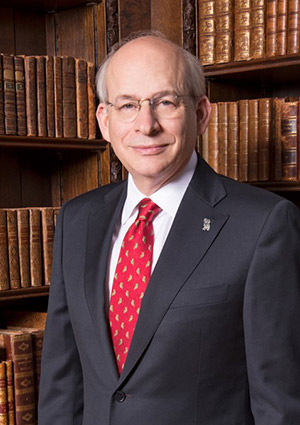 David W. Leebron has served as Rice University’s seventh president since 2004, a period of growth and transformation for the university. A native of Philadelphia, Leebron is a graduate of Harvard College and Harvard Law School, where he was elected president of the Harvard Law Review. Following a judicial clerkship on the U.S. Court of Appeals for the Ninth Circuit, he taught at the UCLA School of Law in 1980. After two years practicing in an international law firm in New York City, he joined the faculty at the NYU School of Law in 1983. In 1989, Leebron joined the faculty of Columbia Law School, where in 1996 he was appointed dean and served in that position until coming to Rice. He is a member of the political science faculty at Rice and has written about international trade and investment, torts, privacy, corporate law and human rights. Leebron is a member of the Council on Foreign Relations and the American Academy of Arts and Sciences, and serves on the Greater Houston Partnership, Fulbright Canada and IMAX Corp. boards. He has also been awarded the Commandeur de l'Ordre National du Mérite by the government of France and the Encomienda de la Orden de Isabel La Católica by the government of Spain, and is the recipient of an honorary degree from Nankai University in Tianjin, China.